The photos below picture the development of the drones, the male honeybee.  Drones hatch 24 days after the egg is laid.  They usually make up about 5% of a functioning, healthy hive.  Their only purpose in life is to breed.  Their only activity in the hive is to eat.  Sounds like a great deal, but better wait to hear the rest of the story.
Drones leave the hive each day to gather and fly in an area called the Drone Congregation Area.  (This area is usually in the same location year after year, which is amazing in itself, due to the fact the drones do not survive from one year to the next.)  There they wait for virgin queens to fly by.  The queen will breed in flight with possibly 12-15 drones.  The drones die as a result of breeding because their reproductive organ is torn from its body.  Those drones that do not breed during the year are driven out to die in the fall by the workers, because the winter stores are too valuable to be eaten up by unneeded drones.  Not such a great deal.  The queen will then lay more drone eggs in the early spring for the new breeding season.  Drones hatch from unfertilized eggs.

Please click on the photos to enlarge and to read the captions for more information. 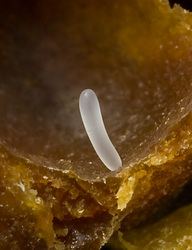 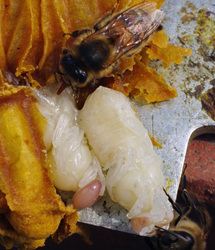 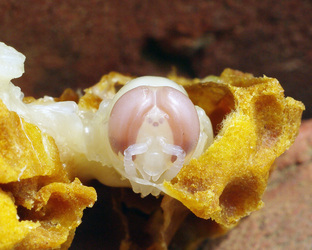 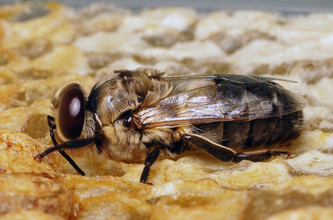 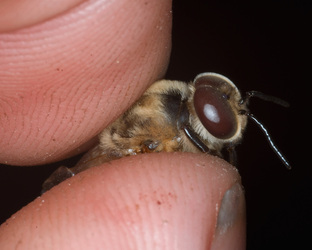 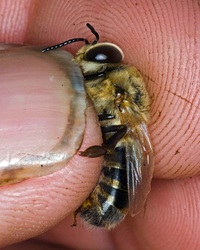 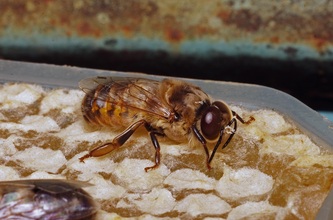 The queen's  purpose in the hive is to lay eggs, she is not "in charge" as is commonly believed.
The queen hatches in 16 days after the egg is laid, unlike the workers who hatch 21 days, or the drones who hatch in 24 days.  A fertilized egg can become a worker or a queen if the bees so choose.  In times of the hive preparing to swarm, when the queen is failing, or when the queen dies for some reason, the hive will start feeding many newly hatched larvae a food called "royal jelly".  It is a food that is manufactured in a gland in the workers body up near the head.  This will cause the larvae to develop into queens.  Because of her increased size and the need for a larger food reservoir, a large cell is built specifically for her to grow in.  It looks much like a tapered peanut hanging on the side or bottom of the comb.  The queen is fed royal jelly her entire lifespan.  Normally the only time the queen will leave the hive would be when the hive swarms.  The other times the queen would possibly leave the hive would be that she is driven out to die when her laying slows  or she is injured and her pheromone weakens (the hive will replace her by making a new queen), or when the entire hive would abscond (leave) due to changing conditions in the hive or location of the hive (pests or destruction).  There is usually only one queen to a hive.  If the workers have a reason to start new queens they will start more than one cell.  If replacing a queen it's normally no more than 4-5, or if they are preparing to swarm, the number of queen cells can be up in the lower teens.  When one queen is needed for a replacement and the queens hatch at the same time, they will locate each other by a sound called 'piping', then there will be a battle to the death for who will be the queen of that hive.  In the case when one queen hatches before the rest, she will sting the other unhatched queens through the wall of their queen cells and kill them.  I'm not sure that anyone understands the decision making that goes on in selecting the queens in a hive preparing to swarm with numerous queens hatching.  Some are killed and some are allowed to live to swarm out with smaller secondary swarms.
Usually within 1  1/2-2 weeks of hatching the queen will have flown from the hive a few times, bred in flight with what can be up to 12-15 drones, and begins laying eggs in the hive.  The sperm from the  drones is stored in a sperm sac called a spermatheca.  This will be the lifetime supply needed for her production of workers.
The queen gives off a unique pheromone and therefore unique to each hive.  Time is needed to introduce a new queen into a hive.  Most often the queen being introduced is placed in the hive in a cage constructed so as to allow contact between the workers and the queen so they have time to get used to her pheromone, but not allow close enough contact for the workers to kill her as a strange queen.  The cage can be designed with a candy plug the workers can eat allowing the queen to be freed from the cage, figure usually 3-4 days, or a cage with the queen under it can be pushed into the comb over some soon to hatch brood .  The workers can still have limited contact with her and the newly hatched brood under the cage will aid in her acceptance to the hive.
Some beekeepers use a dot of paint or a numbered disk glued to the thorax of the queen to help keep track of her age and make it easier to find her in the hive.  Five colors are used.  The five year cycle of colors is-White (or gray)for years ending in 1 or 6, Yellow  for years ending in 2 or 7, Red  for years ending in 3 or 8, Green for years ending in 4 or 9, and  Blue for years ending in 5 or 0 .  The five year cycle is due to the fact that queens have a 4-5 year lifespan.  The marking can also help you know if the queen has been replaced by the hive.  If you had a marked queen, but now have an unmarked one, chances are the old one has been replaced due to failure or swarming.  A very hygienic hive can on occasion clean the paint dot from the queen making it look as if she is not the original marked queen.

Please click on the photos to enlarge and to read the captions for more information. 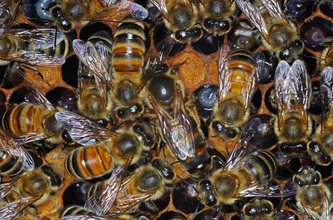 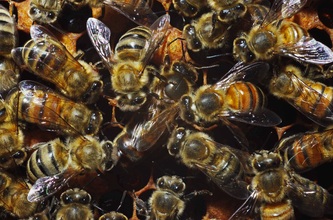 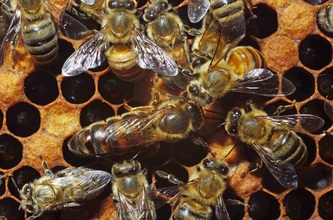 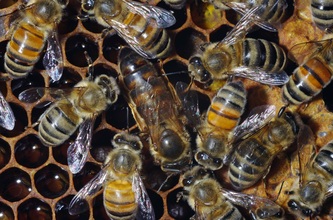 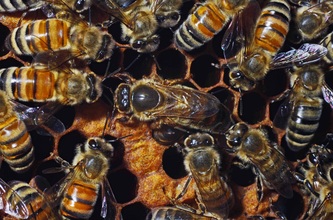 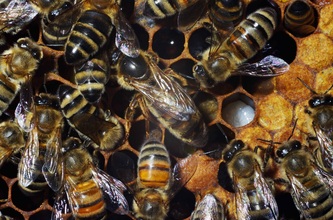 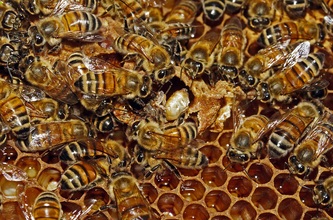 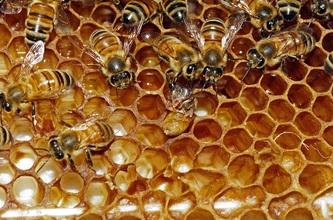 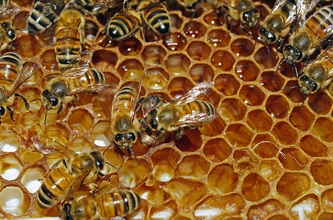 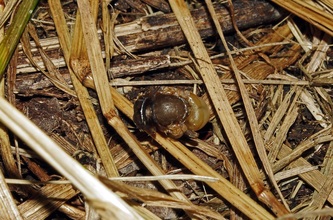 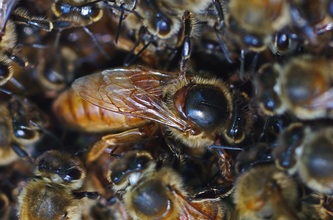 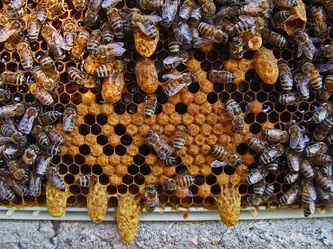 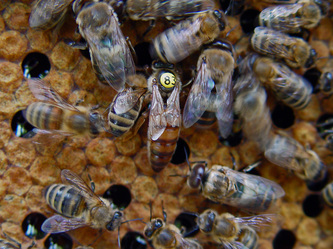 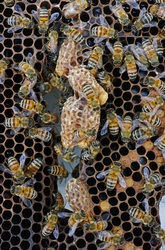 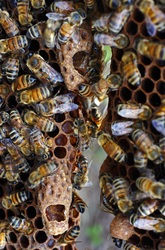 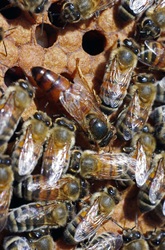 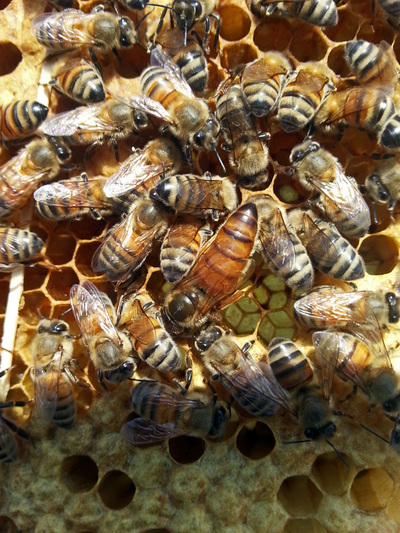 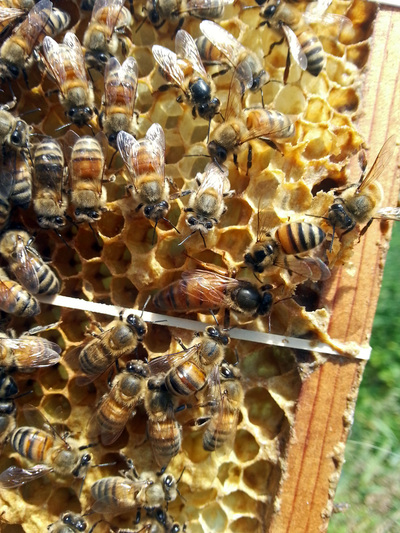