mailto:rvnpirc51@gmail.com          Hi Folks!  Thanks for stopping by my website.  My name is Arvin Pierce.  I have been keeping honeybees since 2003.  Other than wintergreen grease patties the first year, I haven't used any kinds of treatment or chemicals in our hives.  I started beekeeping mainly because I was trying to improve my diet and it made more sense to have a couple of beehives of my own than to be buying all the honey I was using.  I bought 2 nucs of Russians the first year, have kept up to 70-80 hives, but at present I have around 30 hives.   After I found out how interesting and amazing these little creatures are, 2 hives just weren't enough.  Now I do a lot of colony removals, swarm captures, and really enjoy taking the observation hive around to the markets I sell at and to schools or wherever I can and talking  to folks about honeybees.
Photography is a hobby of mine that fits in well with keeping bees.  I've taken many photos and videos over the years and will be using them on this site to help show what I've been doing with the bees and hopefully help you understand a little more about honeybees.  Maybe you'll even get interested enough to get some honeybees of your own if you don't have some already!  In the following pages I'll be posting some information,  photos, and videos of workers, drones & queens, some pests (some more harmful than others) of honeybees and annoying to beekeepers, various removals of swarms & colonies, market and educational presentations, and my blog.  There will also be some links that I've found useful that you might enjoy.

You might notice in the captions of the photos or in the other writing on this site I use  a lot of words like "usually, normally, often, generally, or rarely".  I apologize for that, but there is a reason for it.  It is usually (there I go again) a mistake to speak about bees and their behavior using words like "always or never".  That's just the way it is.  If you like "flying by the seat of your pants" you'd make a great beekeeper!
I hope you can take the time to check out the site.  More photos and information will be added as time passes, so please keep coming back.  You are welcome to send me an email.  Maybe one day we'll be able to meet and talk face to face about bees...'cause I just love to talk about bees!

You can also follow what I'm doing on Facebook at these links:
Personal page-Arvin Pierce
Apiary page-acbees apiaries 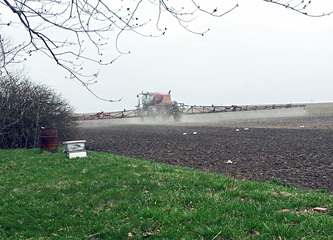 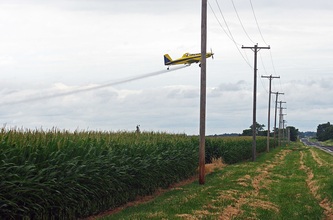 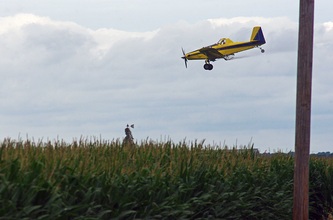 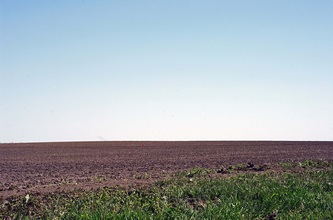 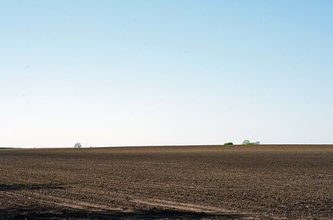 The Need for Forage

The photos above illustrate the biggest problem the bees have, at least in agricultural areas--lack of available forage.  Most of the land is either sprayed and/or farmed or mowed.   Land prices are so high now the farmers feel that every square inch of tillable land has to be  farmed.  Big agriculture means fewer farms with livestock, if any.  That means fewer fence rows to grow flowering weeds and wild flowers and fewer pastures and cover crops.  It means fewer nitrogen fixing clover fields because row crops are more profitable and fertilizers can be used to boost the soils.  Flowering weeds in the spring are sprayed with herbicides in no-till farming techniques.  Roadsides are mowed by farmers and road crews and some are maintained better than people's own yards.  And speaking of yards, more chemicals are being used to keep lawns pristine and dandelion free than ever before when dandelions are very important spring plants for honeybees.  How did it come about that not mowing your roadsides and not keeping your yards well manicured mean you're someone who is lazy with no class?  It has been said that a well manicured lawn is like a desert to a honeybee.
Maybe you can't keep bees, but you can be a beekeeper by helping to provide more forage for them.  You can make a difference.  Don't use chemicals on your lawn.  Let your dandelions grow.  Mow less often or not at all if you can.  Lawn mowers are terrrible polluters anyway.  Plant your roadsides and yards in wildflowers and let them grow.  There is a list of the top pollen and nectar plants on Links page.  Not only will it help the pollinators, but it will help wildlife in general.

Summer of 2011 began something new for acbees apiaries    Chef Mike Higgins of Maldaner's Restaurant in downtown Springfield talked to me at the Old Capital Farmers Market about putting some hives on his roof.  Urban beekeeping has become quite popular in cities in the US and Canada.  Besides having a source of local honey for use in the restaurant,  Chef Mike is hoping to raise awareness for what can be done to make for a greener downtown.   Well, after an article in State-Journal register about the hives came out, the awareness was raised!  The hives, or more accurately the bees, became a concern to some and an item of discussion on the Jim Leach Show on WMAY 970.  Chef Mike and I were invited to go on the show to talk about them.  All went well.  Jim even went up to the hives after the show while I went through the hives.  He even held a frame of bees-no gloves, no veil!  Not bad for the first time!
Keeping bees on a roof in downtown Springfield has had its challenges.  Honey production is limited, not that I forage can't be found, but the distance needed to fly to find it results in fewer trips in the time they have.  Lost both of the hive there after the severe winter of 2013-14, along with many of my other hives in the area.  I cut back to one hive that summer and won't put the second one back until it appears the location can support it . The yield has averaged only around 8-10 quarts in 2014 and 2015.  The surplus honey produced in 2015 was a very dark and creamy, unique to any other that's been produced there.

Please click on the photos to enlarge and read the captions. 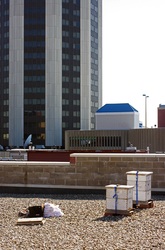 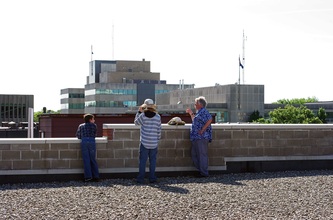 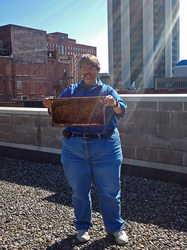 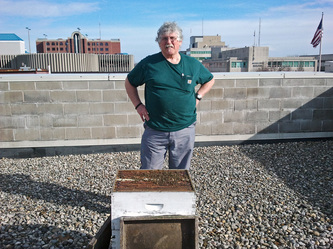 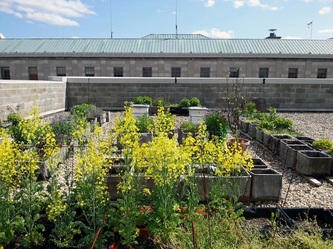 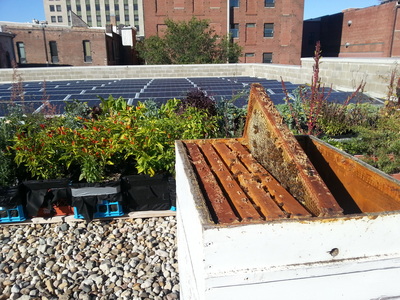 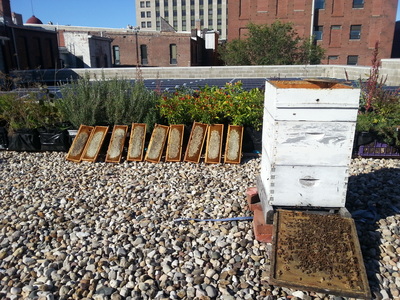 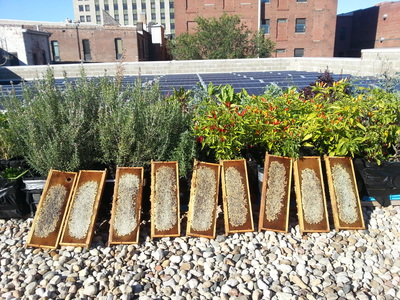 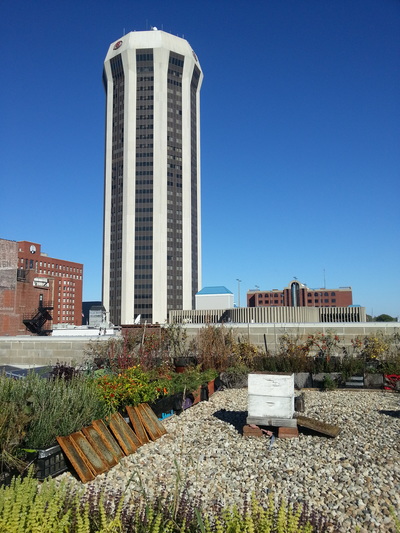 Placed a couple of hives on St. Patrick's Day, 2013, at Illini Country Club at the request of then Chef Rob Wyss (pictured below).  Rob has since taken a job on the west coast, but Chef Mark Andrews and the director remain excited about the opportunity of using their own local honey in their kitchen.  The first year hives only produced around 20 lbs of surplus honey, and the severe winter took both of them.  Got the hive replaced too late last year for surplus, so hopes are high for this year.


Please click on the photos to enlarge and read the captions. 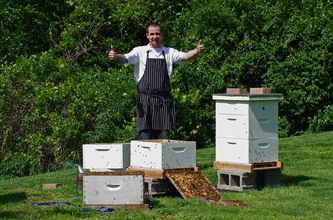 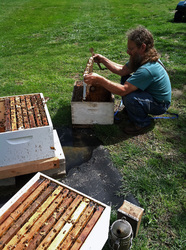 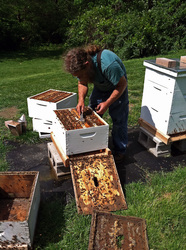